Navagrahas are the nine cosmic objects that are said to have a great effect on the human lives. The Navagrahas include Surya, Chandra, Mangal, Buddha, Brihaspati, Shukra, Shani, Rahu and Ketu. While the Sun is a star, Mangal, Budha, Brihaspati, Shukra and Shani are planets of the solar system. Chandra is the moon and Rahu and Ketu are the north and south nodes of the moon. When a child is born, the exact time is noted. According to the time given, the exact positions of the Navagrahas are calculated. These calculations help in preparing the birth chart of the child. It is believed that each major event, happiness, illnesses, sorrows and even the time of death can be predicted by the astrologers using the birth chart. This birth chart is consulted at the time of cross points in life. The birth chart helps in choosing the right path. There are households that take to consulting the birth chart for every major decision or when a life-changing question arises. Marriage matches, career choices, muhurats for weddings, griha pravesh and more often are done only with the help of a birth chart. The birth chart may not always give positive readings. They may also point out impending disasters. This is often due to the malicious positions of the Navagrahas. At certain times, the rival planets may occupy incompatible positions in the birth chart. When such a problem arises, it is important to perform remedial rituals to appease the Navagrahas.

The Hindu Religion teaches us that the Soul doesn't die and they Soul takes multiple birth, so as to purify itself to attain moksha. That is, the Life is a continuous process and there exists a connection between every birth. When a child is born in this world, its fate is decided by its own deeds and acts in the previous life. That is, the Child would have born somewhere else in the previous birth. During its lifetime, he or she would done many good things and would have done bad things too. The Good things or Virtues would turn into Yogas and the bad things or sins would turn into doshas in the horoscope of the child in the present lifetime. That is, the Child would be rewarded for its virtues in the form of good parents, good physical health & mental health, good wealth, good education and peaceful married life; and so on. The Child would be troubled by its sins (that it had committed under the previous birth) by way of facing troubles in various forms during its lifetime. That is, no one can escape from the destiny that has been invited by themselves by their own deeds. If you have committed the following sins in your previous life, you are bound to face the same kind of agony and sufferings that you had inflicted upon others in the previous life. 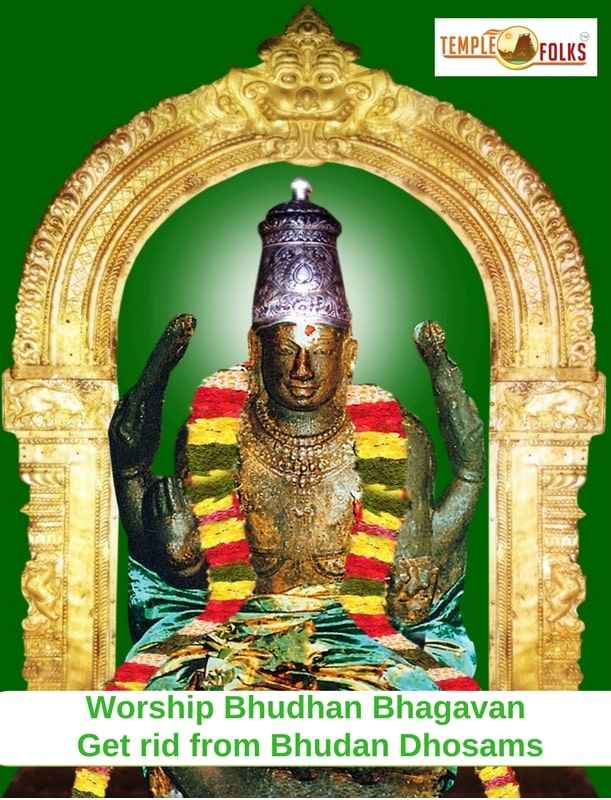 Thiruvenkadu is a reference to the temple in Valmiki s Ramayana. Therefore it is said that the oldest part of the temple is more than 2000 years old. Dedicated to Budhan or Mercury this temple in Thiruvenkadu makes up the last of the Navagraha Temples. Budhan is said to bestow wisdom and intellect. Budhan or Mercury is considered as the greatest among the wise. This Devata bestows wisdom and wealth on his devotees. He is ruled by Lord Maha Vishnu. This temple is referred in Saiva Thirumurais and Sastras. This place is similar to Kasi with all the Snana Ghats.. 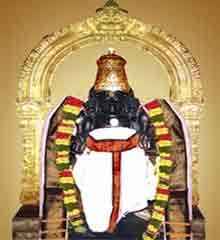 Chandran is also hailed as Thingal and his abode is Thingalur. it is here that Chandran prayed to Lord Siva and got his blessings. As Chandran is held in the locks of Lord Siva, all devotees who worship Easwaran have also to worship this planet. The Devas and asuras were churning the paarkadal using Mandira Malai and the snake Vasuki. The asuras held the head portion of the snake and the devas, the tail portion. The poison emitted by Vasuki was consumed by Lord Siva to save the devas, but the toxicity of venom affected the Devas who swooned on its impact. Alongwith the nectar (amirtham), Chandran emerged and it was he who revived the Devas. 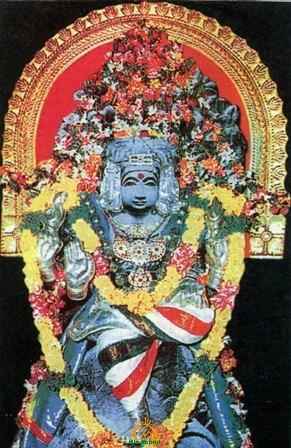 Legend has it that Alangudi is the place where Lord Shiva consumed the deadly poison as emitted during the churning of the paarkadal (Sea of milk). Hence the place is known as Alangudi, which literally mean the place where Lord Shiva consumed the deadly poison. The Devas, when churning the paarkadal for nectar, were hindered by the poisonous fumes from the snake Vasuki and prayed to Lord Siva for deliverance. Lord Siva consumed the deadly poison (Ala Visham) , thus giving rise to the name Alangudi to this sthalam and the Lord was known as Aabathsagayeshwarar (One who defends from the danger). Devas also had a horrid time by Gajamuha suran and Lord Ganesha subdued Gajamuhasuran, and hence Lord Ganesha is worshipped in this sthalam as Kalangaamal kaatha Vinayaga and others. 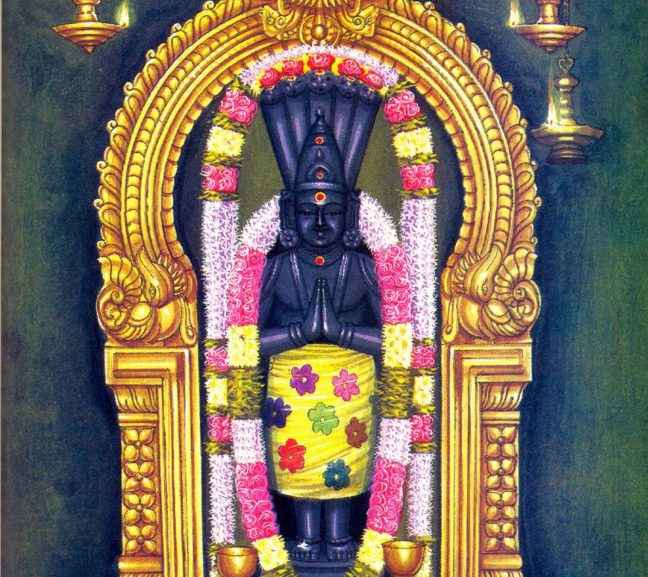 According to the story, when amirtham emerged after churning of the Paarkadal by the devas and the asuras, Lord Vishnu in the guise of Mohini was distributing the amirtham only to the devas. Realising this, Rahu (an asura) with the help of Sukrachariyar, took the form of a deva and consumed the nectar. This was informed to Mohini by the sun and moon. Mohini was keeping a long spoon in her hand and she hit the Asuras head heavily. The Asuras head and the body were separated. But because he had consumed amirtham, his head and body continued to live. The body of the snake got attached to the head to become Ketu. 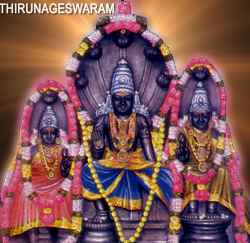 Thirunageshwaram is one of the 127 temples on the southern banks of river Cauvery. It is one of the Panchakrosa Sthalas. The presiding Deity is Arulmigu Giri Gujambika Sametha Naganathaswamy. The Raaghu Sannathi (Nagaraja Shrine) is on the South-West direction of the second prakara. ThiruJnana Sambandar, Thiru navukarasu Nayanar, ThiruSundramoorthi Nayanar, and Arunagiri Swamigal have praised the glory of the Lord.a King built the beautifulSurya Puskarani beautifully. The roof and other renovation work were done by Arimalazham Annamalai Chettiar. Gnaniyar Swamigal, the great saiva scholar, who was the pontiff at the Mutt at Thiruppapuliyur, was born here Siva , hence this place is named Thirunageshwaram. Further Raaghu had received a boon from Siva for bestowing grace and prosperity to those who worship Him with devotion. He took His abode as God with His two consorts.. 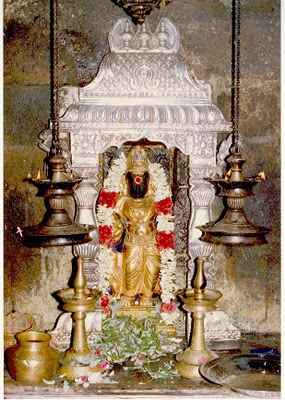 The name TIRUNALLARU is said to represent the association of Nala of the Nishadha country who got his deliverance from the evil effects of Shani (Saturn) by invoking the Lord s mercy here. (Nala+Aru-Nallaru). The word Aru also conveys the meaning to heel and the two words taken together will mean Nala s place of redemption or the pace where Nala secured his redemption from the hold of Saturn through the Lord s Grace. Others are inclined to read the meaning between rivers in the name Nal-Aru, as this place is situated in the midst of two rivers in the north i.e. Noolaru and Vanchiaru, and one in the south, Arasalaru. 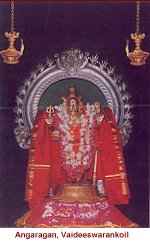 Chevvai Bhagavan is worshipped in the town of Vaideeswaran Koil which is also called Thirupullirukku Velur. Sambathi, Jadayu, Lord Muruga, Suriyan are also reputed to have worshipped in this sthalam. Even diseases that could not get cured by Mani Manthira Aushathangal got cured at this place and the presiding deity came to be called Vaidyanathar. His consort who was the chief of women of both worlds is hailed as Thayal Nayagi. Selva Muthukumarasami of this temple is lovingly called Muthiah. 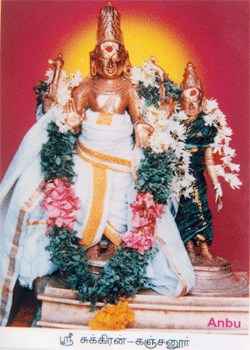 Kanjanoor temple is one of the Navagraha kshetras dedicated to Sukran ( Venus) and it is 20 kms from Kumbakonam,26 kms from Mayiladurai,3 kms from Suryanar kovil and 3 kms from Aduthurai. Agneeswarar is the presiding deity and his consort is Karpagambal. Sthala vriksham (Holy tree) is Purasu and the holy water is Agnitheertham. Agni (Fire) is said to have worshipped Lord Shiva here and hence the name Agneeswarar.The Brahma Lingam enshrined in this temple is said to have been worshipped by Brahma himself. 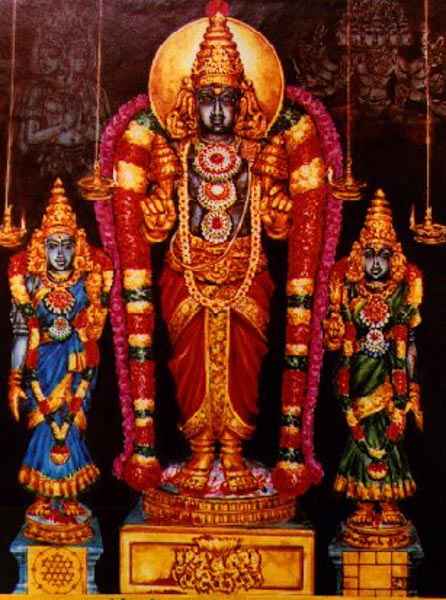 Lord Siva, pleased with their devotion absolved them of their sins and decried that there will be nine sannadhis for the navagrahas in the Suryanar temple (this is the only temple where all the navagrahas are present with separate sannadhis) and those who pray here will get relief from their problems,Those who suffer the ill effects of Kalathara Dosham, Vivaha Paribandha Dosham, Puthra Dosham, Puthra Paribandha Dosham, Vidhya Paribandha Dosham, Udyoga Padhibandha Dosham, Surya dasai, Surya bukthi would benefit from worshipping at this temple. Father, Athma, physical strength, right eye, governmental largesse are the beneficial aspects of this planet. If one bathes in the nine ghats in this place continuously for 12 Sundays, they will be saved from sufferings and blessed with a happy and peaceful life.

Though all my interaction was entirely online the service provided was excellent with both good drivers and vehicles.